There is little doubt that the long anticipated series finale of the amazingly popular television show LOST has left many questions unanswered…for some viewers this is a problem.  After all, we’re all looking for answers, right?   And there were oh, so many questions raised in the midst of all that mystery and mayhem that made up the lives of the passengers of Oceanic 815 and indeed, amongst the “other” inhabitants and visitors that made their way to the enigmatic “Island.”

Every question deserves an answer.  But every answer will only lead to yet another question…

And so many questions remain.  Yet…having viewed the incredible conclusion of this ground-breaking show, I, like the hero of our story, am no longer seeking those answers.   The name of the Man In Black doesn’t really seem so very important.  Deeper and more significant are the answers that were given.   The creative forces behind LOST have woven a story of such beauty:   life and death, sin and redemption, grace and mercy; magic, myth and reality…all played out so poignantly in the last moments of the life of Jack Shepherd;  former “man of science” and now the ultimate “man of faith…”

~An opening scene on a bright sunny day in front of a Catholic Church…the very Church where Jack will see “the light…”  The camera pans in an settles upon the larger than life statue of our Blessed Lord, arms outstretched and welcoming.

Near the end of the show, as each of the characters has made their way into the sanctuary, we see this same statue at night:  a bright, white light shining upon the merciful Christ…seemingly revealing Jesus as the Way, the Truth and the Life…and Jack is coming to “claim” his father, in my mind THE Father of all humanity.

~I learned that some of the cast would not be “moving on…”  Eloise, who murdered her son once, won’t let him go…and continues her purgatory, holding onto her son as a lifeline…

~The “sacristy” or small anteroom where Jack finds his father.  A stained glass window decorated with a Star of David, Cross, Ankh, Yin/Yang, etc.  On shelves and pedestals we see statues of Buddha and Shiva, rosaries and menorahs…all the images of the faiths practiced by these people who are now ready to “move on…”

~And then the ultimate:  We see Jack, lead by his father, into the sanctuary of an enormous Catholic 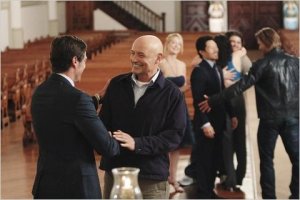 Church…walking past the altar with the tabernacle as the central focus.  Friend embraces friend…Muslim embraces Catholic, and Buddhists embrace all within the safe haven of the One, Holy, Catholic and Apostolic Church.  An amazing visual, explaining as few words can, the often misquoted, misunderstood and yet essential tenet of our Faith: extra Ecclesiam nulla salus. It is all so beautifully and simply explained in this scene: Sayid the Muslim, Jack the Catholic, Jin and Sun our Buddhists…all before the Tabernacle, all “Inside the Church,” all preparing to “move on” together…to eternity.

~We see Christian, the father, open the doors and reveal a light of such piercing beauty…every one of our friends has turned towards it.

~And then we see Jack…Jack letting go.  Moving on.  Joyfully…

There were so many other scenes, before and after that were meaningful, but these stand out, particularly for this Catholic, as beautiful testimonies to the faith and faithfulness of the primary message that has permeated this show:

I can’t pretend to know the minds and intent of the show’s creators, but I feel as though I finally “get it.”  And I can only give my own opinion, reading into this tale, as I would any story, the truths that are essential, that reveal my faith.  I would so enjoy reading your take on those final moments…we bring our own baggage into every story, every experience.

Where did LOST take you? It was such an amazing journey, one that has reached it’s final destination, and I for one, am sorry that it had to end.

But what an ending!

I am a traditional Catholic homeschooling mother of 9 children, married for 34 years to the most patient and sainted man. As converts to Catholicism in 1991, our family has only recently discovered the beauty and full expression of our beliefs in the beautiful Tridentine Rite also commonly referred to as the Latin Mass. An avid knitter, I also enjoy gardening, reading and immersing myself in the everyday graces of my vocation.

9 thoughts on “Finally getting LOST…”